This is Women’s History month.  A month where we celebrate Her, Me or the She that has inspired us, made us rethink who we are and what we do or simply that one woman who in some strange way made a difference in this world of ours.  Some women are bigger than life, other women are quietly going about making change and then there are some that just made their dream come true.  I would like to share a bit about one woman who did just that …. her relationship with nature impacted her life so, she became a true Steward of The Land – Lady Bird Johnson. 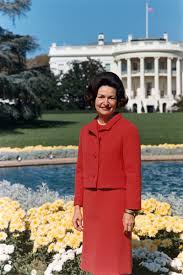 Claudia was born in East Texas and was very familiar with the huge cypress trees and Spanish moss that was found  around Caddo Lake.  A family friend nicknamed her “Lady Bird”, because of her grace, sharp features and natural beauty.  Other than just being a pretty face, Claudia was certainly a woman before her time and was intent on educating her self to become a journalist.  Claudia met and married Lyndon B. Johnson in 1934 after a brief period of dating.  I wonder if perhaps her sharp mind and her gracefulness was what attracted her husband to her, other than her natural beauty.  Claudia used some of her inheritance to finance her new husband’s political pursuit, perhaps she had a master plan of achieving her goal of protecting our natural landscape, for all to enjoy.

After the unfortunate death of President John F.Kennedy, Claudia – better known as Lady Bird by this time – became First Lady.  This however was not a trophy role, as Lady Bird set out to make some changes in the beautification effort in Washington, DC.  With bulb plantings, trees in medians and plants to spruce things up, Lady Bird was instrumental in creating the First Lady’s Committee for a More Beautiful Capital.  This effort became known as the Highway Beautification Act of 1965.   The Highway Beautification Act was instrumental in the removal or minimization of billboards along the roadside, junkyard’s or lots that had an unpleasant appearance had to be screened  and shared views along the highway were renovated to become more scenic.  This movement was much more than a field of wildflowers in a median, it was  and is a movement that encouraged all to become better stewards of this land of OURS.  This might be hard to believe, but as a 7 year old news hound, I remember hearing and seeing this movement evolve on the news and was inspired.  I used to accompany my Dad to work at the Smithsonian and was allowed to wander all across Our National Mall, while he worked.  I remember seeing the workers planting, taking care of the turf and making things oh so beautiful. I was inspired because a woman was leading this charge, while my Dad seriously expressed that there were certain things that a girl should not do.  I remember seeing a transformation of the landscape throughout DC as we traveled to Church and to visit family.

One of the first plantings that Lady Bird was responsible for was on Our National Mall.  This bed of pansies led to numerous other plantings that included azalea’s and dogwood trees at Third Street and Independence Avenue.  What I find is also a beautiful thing, Lady Bird did not just stop at beautifying Our National Mall, but she also took this effort into the Projects of the inner city.  How bold was that – particularly at that time in our Nation’s history? By soliciting private donations, private assistance with man power and with the assistance of The Park Service, Lady Bird made quite an impact throughout DC not only by planting assorted plant material and bulbs, but by encouraging businesses in impoverished areas to take pride in their surroundings.  Litter control was encouraged, beautification certificates were presented to encourage neighborhoods to care and take ownership of their surroundings.  Project Pride was noted for being a recipient of a beautification grant for $7,000 from one of Lady Bird’s Beautification groups, Society for a More Beautiful Washington. There are so many things that Lady Bird was instrumental in getting started that would play a major role in the beautification effort nationwide.

Lady Bird has such a long list of accomplishments that relate directly to the beautification efforts and enhancements throughout DC, as well as throughout this country.  President Johnson was quite proud of his wife and appreciated the efforts of Lady Bird. Knowing that Lady Bird cared about the beauty that surrounded each of the residents of Washington DC, as well as The United States was something that I truly admired.  Lady Bird Johnson made a difference, merely by connecting with the land and recognizing the natural beauty that needed to be enhanced, as well as preserved.

I was on a mission this month to share something about a few women who had an impact in horticulture, names that I am sure we all know.  Here is a woman who – at least to me – set quite a high bar for other’s to follow.  I would like to share a quote from one of Lady Bird Johnson’s speeches, that touched my soul…………..

“My heart found its home long ago in the beauty, mystery, order and disorder of the flowering earth…..”

Women’s Rights Activist, Ecologist, Supporter of Equal Rights, Author, Recipient of the Medal of Freedom, Congressional Gold Medal and numerous other awards for her passions.

With an example like Lady Bird Johnson as a woman of note in  my childhood, I knew that one day, I would garden and find the beauty that surrounds me. As we close out Women’s History month, let’s celebrate the life and times of Lady Bird Johnson and continue the pursuit of finding the beauty in our surroundings.

(If you are interested in finding out more about Claudia Alta Taylor, there is a movie presented as part of the Environmental Film Festival which speaks to her life and mission.  A LIFE: THE STORY OF LADYBIRD JOHNSON by Charles Guggenheim, will be presented on Tuesday, March 24, 7:00, at the National Museum of Women In the Arts for a nominal fee of $5.00.  For more details go to www.nmwa.org)